We are very fortunate - truly blessed - to have received 'less bad' news at morning rounds about the extent of the damage to Lily's brain! Right now, Lily's brain damage is NOT PVL, which is the most severe type of this particular brain injury. It still falls under the "white matter damage" umbrella, but it looks more like inflammation than full-blown PVL (which is the most severe type of white matter damage), which is essentially holes, cysts, and dying parts of the white matter that acts as a sort of nerve control center of the brain.

The nurse practictioner and fellow with whom I spoke last night told me what the radiologist said about Lily's brain scan - after my visit, the hospital's neurologist looked at the scan, and determined it was "questionable white matter damage". QUESTIONABLE. That's what we're hoping for - there IS A CHANCE that at next week's scan, it will not show up. That said, there is also a chance it will get worse. We are remaining positive and hopeful, though, and are praying that it doesn't show up again. Or if it does, it regresses or at the very least doesn't get any worse. I'm not sure we could handle progression of it at this point.

Lily's attending physician also looked at the results - amazingly, he happens to specialize his medical research in white matter ventricular damage - he also confirmed that it is not PVL. The attending physician decided not to run an MRI, rather to run an ultrasound in one week. The risks posed by the MRI on such a young brain do not outweigh the benefits of the information an MRI would provide - after all, absolutely nothing can be done about the situation.

Is it frustrating to have been told "it looks like she has PVL", in so many words, last night - of course. Last night was spent in complete anguish. But that's how NICU's work... issues get escalated to experts, whose opinion ultimately overrides those will less expertise than them. So, our prayers have been answered - for the time being - it is not PVL, there are no cysts, and there are no holes or dying parts of her white matter - just inflammation. 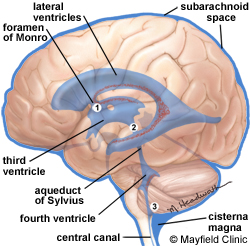 As I mentioned, Lily's ultrasound indicated "white matter damage" (WMD) in the white matter that surrounds the left lateral ventricle of her brain. It basically shows up as a hazy, inflamed area on the ultrasound - ultrasounds are not precise instruments, though.

The left ventricle is where math/science/etc. skills are formed. The right ventricle is arts/music/etc. skills are honed. Learning disabilities we can deal with - we are just praying - pleading - for no cerebral palsy or severe neurological challenges. "We have to wait and see", they say.

There are two types of WMD: Localized or Diffused. Lily's is the less severe - diffused - which refers more to a diffuse area of  inflammation rather than localized holes or cysts. The incidence of cerebral palsy (CP) in infants with localized WMD, or PVL, is 70-80%. The incidence of CP in infants with diffused WMD is 10-20%. There are, however, infants with either localized or diffused WMD that have grown up to lead perfectly normal lives - they may be the minority, but they still exist. I'm about as far from a neuroscientist as it gets, so I'm going to quote a web source here:

"White matter in the brain is made of axons, which are like wires that carry messages between neurons and supporting cells. White matter sits underneath the brain’s cortex, or grey matter. In general, white matter damage (WMD) is caused by a lack of oxygen to that part of the brain.

Periventricular leucomalacia (PVL) is a condition in which decreased blood flow to brain tissue causes it to soften up and eventually die. Although PVL may cause WMD adjacent to the ventricles, resulting in cysts, WMD can occur without cyst formation and also in other areas of the brain for other reasons.

The range of severity and possible subsequent long-term outcomes from WMD is large. In many cases, the area of damage may be more important than the extent of damage; the various functions of the brain are often controlled by very specific and well defined areas. For this reason, a limited amount of damage in the wrong place can mean lasting and possibly even catastrophic effects. Conversely, some premature babies can recover from extensive damage provided no vital areas are affected. The brain, especially in premature babies, is plastic: if a certain neural pathway is damaged, sometimes the brain can find a new route to send information and commands from one part of the brain to another.
As with PVL, while WMD may appear on a magnetic resonance imaging (MRI) scan, the effects of the damage may not appear for up to a year. The more severe the damage, however, the more likely it is that the effects will show early."

Thank you everyone for the prayers and positive energy, they bolster our hope. Sara and I are taking it one day at a time, and are staying strong. 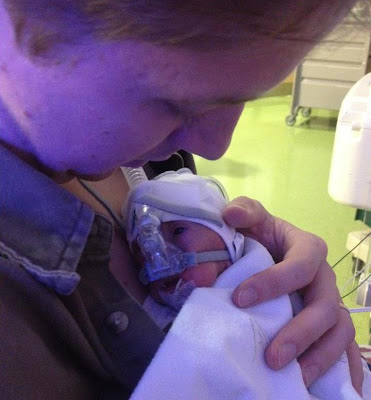